Success for trainee Holly McGarrigle as she’s called to the Manx Bar. 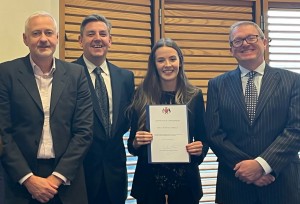 Cains, is delighted to announce that Holly McGarrigle has been formally called to the Manx Bar, having passed her exams in November 2020. She was sworn in as an Isle of Man advocate by the Island’s First Deemster, His Honour Deemster Corlett, at a formal ceremony on 21st October 2021.

Holly joined Cains as a trainee advocate in July 2019, having previously gained experience in the conveyancing department of another Isle of Man law firm. Prior to this she attended the University of Liverpool, graduating in 2017 with a Law with Business LLB (Hons) undergraduate degree, before attended BPP Law School in Liverpool to attain her postgraduate diploma in Legal Practice.

During her articles, Holly gained valuable experience in the areas of corporate and commercial, banking, finance, and commercial property, working alongside the firm’s Isle of Man experts. She now works across Cains’ top tier Corporate, Banking and Commercial Property departments and assists with advising on a broad range of financial and property matters, acquisitions, disposals, commercial and residential site development projects and property finance.

Holly commented: “I am absolutely delighted to have been called as a member of the Manx Bar. After several years of studying, I am looking forward to my next chapter at Cains as a qualified Advocate and the new challenges and experiences that come with it. I would like to thank my family and my colleagues at Cains who have been instrumental in helping me to reach this point in my career through their support and guidance.

Tim Shepherd, Director and head of Cains’ Banking and Finance team, said: “The whole team at Cains is extremely proud of Holly’s achievement of being admitted to the Manx Bar, which is the culmination of a lot of dedication, hard work and commitment.  Since joining Cains, Holly has developed into a valuable member of our leading banking and finance and commercial property teams and we look forward to supporting her through the next stages of her career.”