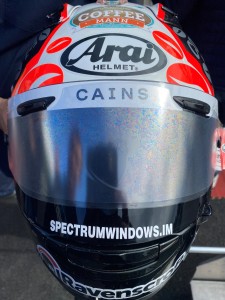 Cains was delighted to be sponsoring Conor Cummins as he prepared to take on the title challenge in this year’s Isle of Man TT.

As one of the leading Isle of Man law firms, Cains is proud to support its community and we were thrilled to have the opportunity to sponsor Manxman Conor during the hotly anticipated return of TT racing.  The Cains logo could be seen at the top of Conor’s helmet visor.

“It means a great deal to have such an established local company such as Cains to back me and give me their support” said Cummins.  “The sponsorship is well received and will help me and the team to continue competing and racing.  The sense of community in providing this support is clear, and to be racing on my local track, with sponsorship from an Isle of Man business, is just fantastic.”

Cummins will be riding the latest generation Padgetts Milenco Honda CBR1000RR-R Fireblade for the 2022 race season, competing in the North West 200, the British Superbike Championship and next week’s Isle of Man TT.

Tim Shepherd, director of Cains, said: “The Isle of Man TT is one of the biggest events in the road racing calendar and to be able to support Conor, a local sportsman who is cheered on by all of us here on the Isle of Man, is fantastic.  Cains is invested in our community and this is a wonderful way to contribute to that ethos.  We wish Conor every success and will be cheering him from the side-lines.”